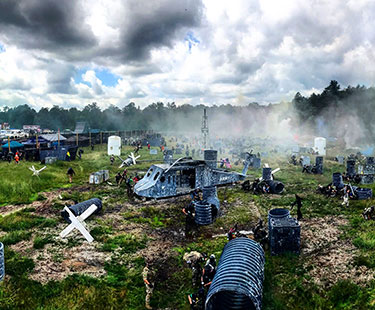 There are many different styles and game formats to paintball. Each offers the same exciting, heart pounding, action packed game adventure you’d expect. How they all differ slightly is in size, game length and time spent on the field. Here are a few different modes of play for paintball:

Classic Woodsball is what you will find in the vast majority of paintball fields across the globe. This is where most, if not all, players are introduced to the game of paintball. In this mode you will find your beginner players and regular ‘walk-ons’ or your casual player who comes and plays every month. This style of play has players set up from 3 on 3 to 20 vs 20, all depending on how many people are in a group and the limits of the playing field. Almost all of these games take place in the ‘woods’ or as close to the woods as the local landscape allows. In woods ball there are hundreds of different gameplay modes from elimination, capture the flag, zombies, zone control, attack and defend, and many others. To get involved in this type of play call your local field and ask what days are best for woodsball play.

Speedball is the next and second most common type of gameplay found at your local paintball field. Here you play on fields that are wide open and have most of your view of your opponents unobstructed. This type of game play is much faster and aggressive. Most commonly you see speedball referred to as tournament play. Here you have paintball markers that are electronic. These markers are set to fire at preset rates of fire per the rules of the tournament. These fields can be constructed of pipe tubbing called hyperbola or inflatable air filled bunkers. To join one of these games you will have to talk to the refs at the field to get a party game in, or venture over to the teams practicing/playing and ask to join in.

Scenario paintball games are generally bigger woodsball games. These games can and have become weekend long massive events. In scenario games or big games as they are sometimes called, players are split into two massive teams, from 100 vs 100 to 2000 vs 2000, where they try to complete objectives inside the bigger overall game. In these games, which are usually held annually, you will see groups/teams of players form up to play special roles for their team. There are typically ‘Generals’ or leaders of each team. Objectives can range from capturing certain areas on the field for a period of time, storming an enemy strong hold, finding different props or objects hidden on the field, to simply eliminating all of your opponents. Completion of these tasks gives the victorious team points. At the end of the game the team with the highest amount of points is crowned the winner. Check in with your local paintball field for scenario game dates.

Low Impact games are for beginners and more importantly young players, aged 10-15, who have never played or experienced paintball before. This type of play involves paintball markers that are specifically designed to shoot at much lower FPS (feet per second). The typical FPS for regular woods ball is 280 feet per second. In low impact paintball the speed ranges from 200-250 feet per second. The next big difference in low impact is that the paintball size is much smaller. These paintballs are .50 caliber. Normal paintballs are .68 caliber. It is common to hear low impact referred to as 50Cal but it must be noted that 50 caliber paintball guns can also shoot at normal paintball speeds, 280 fps and higher. To find out if your local field offers low impact, give them a call and ask. Be sure to inform them of the age and skill level of your group.

Mechanical & Magfed are the last two types of play that have a small niche in paintball but have been growing significantly. Theyl get their own events or games but they are far less common than woodsball, speedball, and scenario. What makes them unique however is that these two typse of play refer to the format of the paintball marker and not the game itself. Mechanical is the term used to describe the paintball marker. There can be no electronics in the gun. When paintball began in the 80’s all guns were mechanical. This trend moved through the mid 90’s when the first electronics came into being in paintball makers. Mech, in the short term, events are games or tournaments where you can only use non-electronic paintball markers. When it comes to playing woods ball, speedball, or Scenario there is no restrictions and players can use either. Magfed paintball, as the term suggests, is a paintball gun that is loaded and fed through magazines. These guns have either been modified or bought to be used for this specific purpose only. Players are forced to carry and pre load magazines on them for games. This limits the amount of time it takes to reload and adds a great dynamic to the game. If you have an interest in either of these types of paintball markers or game play, simply talk to your local paintball store or field owner.