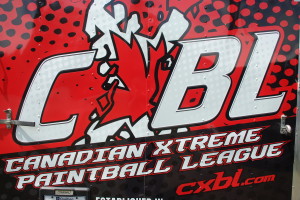 15 Balls per second, two 25 minute halves, no race to, no score limit, 2 minute minors, 5 minute majors, and a whole lot of paintball. That is what the CXBL is. I love it. The CXBL is Canada’s premier league and it has held true to the original X-Ball format for the last 10 years. I have been fortunate enough to be playing in the league since 2007 and there is no way I will stop unless Canada bans me from entry.

The CXBL started 10 years ago, happy 10 year anniversary guys, and is not only the name of the league but the CXBL is the top division in it as well. The league has 4 divisions, the CXBL, known now as Elite (PRO), the MXL, RXL and RT5. Each of these divisions has something a little different to offer but all work there way up to the top, gradually making you comfortable with the format. What I mean is that, and I’m not 100% sure which is which but one division has a semi capped rate of fire and less game time, as you move up the rate of fire goes up and the games get longer.

The league, as far as I know, is one of the first if not the first to have individual statistics based of your jersey. The idea, which is simple and genius, used to be that the teams would receive all 15 of there players jerseys before the season starts. You pick or are assigned your jersey and #, from that point on you cannot change or lose your jersey, if you do…no more playing in the league. Now with your assigned # the league would document every time you were on the field which gave you a +/-, penalties, flag hangs, games played, and NAX points, a series of points awarded at the end of each match to players who made great moves or were basically the MVP for their team. The player who has the highest amount of NAX points at the end of the year wins a prize, some prizes have been trips to Mexico/Cancun, a new Luxe, and other various paintball awards. Pretty cool stuff.

The last 3 years Houston Heat has went up, as a full team for the most part, and played in the league under another franchise. Oh right that is how the league works too! Teams are owned and sold. There is fee that is payed during the off season to retain and maintain your team. These fees cover jersey, some paint, ID cards, and other league related items for the up coming season. Teams are given town names to go along with their respective location. We are Montreal Heat, there is London Vicious, Omaha Vicious who also competes in the league as well, and other Canadian city and towns to go along with every team in every division.

This year, as Montreal Heat, we have played at one event and had 4 matches. The events work as a regular season with teams having to win  a certain amount of games to get to the playoffs or Richmond Cup at the end of the season. Teams who fail to do so and are at the bottom of their division face relegation to the next lowest level and teams who win or place in the top 2 or 4 spots get moved up. I really like how the league has implemented this and I’d have to say that it has worked out very well the last 10 years.

Playing at 15 balls a second is something, I believe, everyone should try. You ever feel like you’ve ever been over shot? Try being the last guy alive when the other team has all 5. It takes a lot to get an over shooting penalty in the league, not to say that it doesn’t happen but man you get shot a lot. Add two 25 minute halves to the game and you have got one hell of an experience. When I first started playing in the league there were some games where the score would be 22-3. Things have leveled out and I can easily say that there are quite a few Canadian players who can easily play Pro in the PSP, US.

The CXBL, has the old DXS show truck, so they have a giant truck full of gear and paintball equipment on hand. Not only is there a show truck but Planet Eclipse and DLX has techs there to help any teams in need. There is a VIP booth with free food and drinks, chairs with a great view of the CXBL field, and amazing slushies….so tasty.

I can say that the CXBL, Canadian Extreme Paintball League,is one of the best run leagues in the world. If anyone has the chance to play or go to any of there events, do it.

is one of the best run leagues in the world. If anyone has the chance to play or go to any of there events, do it.