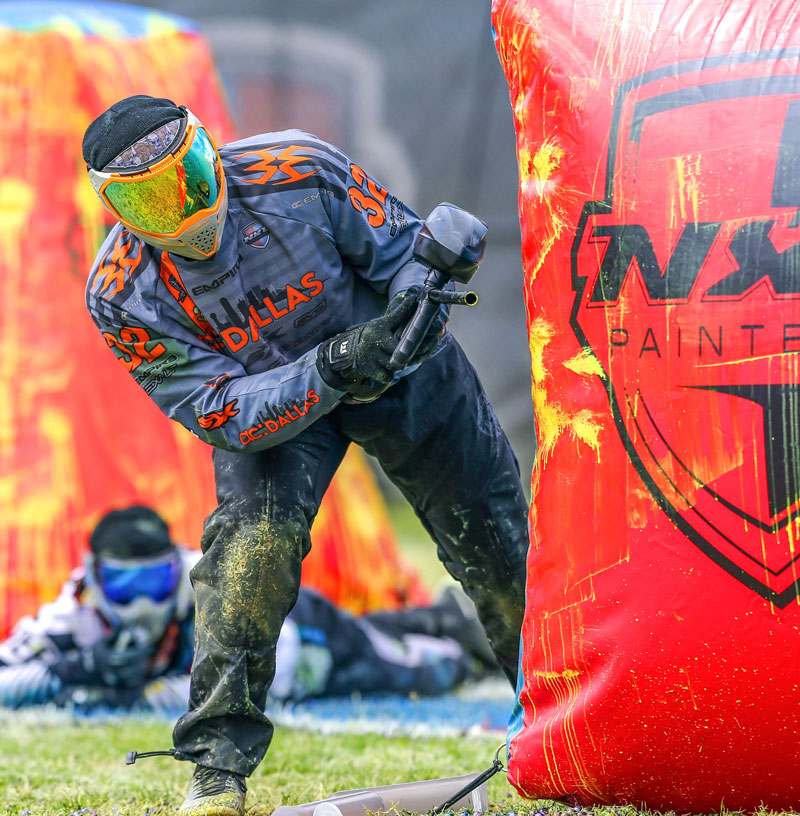 When someone thinks about paintball, often they picture players “running around in the woods” attempting to tag one-another with paintball guns. And while that is an essential part of the game of paintball, the game is a little more organized than that and as such, like any other game or sport, basic concepts and fundamentals can be used to build a successful day at the paintball field!

Paintball started in the woods and continues to be played there today over thirty years later! However, there are many other types and styles of paintball, and maps, fields and courses on which the game can be played.

Competitive tournament paintball is played on a flat, rectangular field often surrounded by netting so spectators can safely watch the games. These small fields lead to fast-paced, athletic play.

Other basic styles of paintball include “attack and defend” games that require one team to protect a piece of ground or large structure like a tower, fort or castle, while the opposing team attempts to take it within a certain amount of time. Some games require players to score points by capturing control points on the field of play, finding hidden props located within the field, or completing missions. Other, more basic styles of paintball play include “total elimination” in which the winning team eliminates all members of the opposing team and the classic “capture the flag” style, pitting two teams against one another trying to capture the opposing team’s flag.

What all the playing styles and game types in paintball have in common are the fundamentals of the game, and the understanding that the game must be played safely. While terminology of the basics of paintball may differ from region to region or country to country, to win a game of paintball one team must use communication and movement to put their players in the right positions to mark their opponents with paintballs, getting them off the field and making any game easier to win. The fewer players the opposing team has active on the field to shoot paintballs back at you the easier it will make capturing a flag, taking that castle or locating the objective.

While stepping onto the paintball field and marking opponents with a paintball gun may seem simple, once the goggles are on and the paintballs are flying, things tend to get a little more complicated and the team that wins will always be the one that learns to work together! The way to jump-start that basic teamwork on the paintball field is with the fundamental concept of communication. While creeping and crawling around in the woods or hiding in the ramparts of a castle, no single player can see everything on the field or know where all the incoming paintballs are coming from. The same can be said for all his or her teammates spread throughout the field: some crawling, some creeping, some shooting and battling with opponents, some hiding. However, everyone on the paintball field can see a small piece of it. When teammates shout the information they do know, about locations of opponents, when they see an opponent move or some other piece of critical information, to their nearby teammates, individual players can quickly become a functional team. As a team they assemble the pieces of the puzzle and work together to win by shooting while others move, working together to dig a pesky opponent out of a fortified position, or moving players around the field to compensate when friendly teammates are eliminated. The better teammates communicate and work together as a team on the paintball field, the easier it is to win!

Another basic concept of paintball that must be learned in order to enjoy success on the field is movement. A paintball player who simply finds a good piece of cover, gets behind it and stays there won’t be much good to his team for very long, and may soon find himself a target for several opponents. Players must be willing to work together to help one-another move forward and around their opponents so that shots can be made, objectives located and flags captured. If you shoot at an opponent and he ducks behind cover, it’s time to move! If your teammate next to you wants to move, cover him! Don’t be afraid to make a move! After all, if it works, you’ll be a hero and if it doesn’t, you’ll simply get a little paint on you and come back to try again next game!

A final fundamental of paintball is everyone’s favorite – shooting paintballs. While it may be your first time and you might be using rental equipment, take a few minutes to head over to the target range and get dialed-in! Pull that paintball gun tight into your shoulder and aim down the top of the barrel, take a few shots and watch where the paint lands! Try it again at closer range, and then at targets far away. Once you’re in the woods and paint is flying, knowing how to hold your paintball gun and whether or not elevation is needed to land a paintball on your target will take a lot of the guesswork out and give a player the advantage over opponents who simply shoot from the hip, or didn’t practice at the target range at all! The first time you see a paintball leave your barrel and splat on an opponent’s goggles is a moment you’ll never forget!

A group of paintball players able to pull together the fundamentals of communication, teamwork, movement and accurate shooting will have a great day at the paintball field and even if they don’t win every single game, they’ll certainly make their opponents have to work much harder to hang that flag! Just remember to play safe and have fun!