“Eyes On” with HDR Lenses! 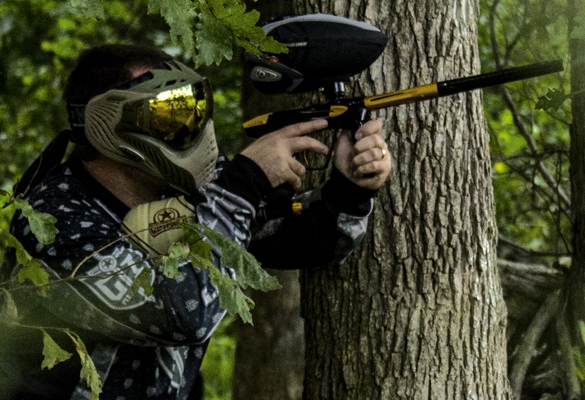 So let me start with a little introduction – I’m the new guy. I’m Josh Silverman and I was recently hired by G.I. Sportz to lend a hand in Marketing and PR. Though I’ve worked with G.I. Sportz in the past, it’s been a while and there’s plenty of new equipment in the company lineup and to properly do my job, I need to learn it all. There’s no better way to learn about paintball equipment than to get out there and play, so when I heard OXCC Paintball in Maryland was hosting a scenario, I packed up the truck and headed that way. This was to be my first event using HDR lenses and while I’ve worn VForce goggles for years, thanks to the HDR lens this was an almost entirely new experience I just had to tell everyone about!

The scenario game I played last weekend, produced by TSSOC, was well-run and drew around 300 players to the outstanding OXCC facility. This place has everything, from bunkers and forts to some excellent “old school” wooded playing fields that have played host to Tom Cole’s UWL events. Then there are the Chinook helicopters (yes real ones), the firebases, trenches and a complete “airport” with a control tower and planes! I could talk about the flat, groomed-grass tournament fields too, but this is about woods ball so I’ll hold that back for another time. I love this place! The weather for the game was cool in the morning with a heavy blanket of clouds holding back the sun. Perfect weather for paintball in the morning turned to somewhat less ideal conditions when the rain finally let go around midday, but luckily I got my playing time in before the raindrops.

The cloudy, cool and slightly muggy weather may have made creeping, crawling and shooting it out in the woods much more comfortable than a day in hundred-degree heat, but OXCC’s woods offer lots of old-growth trees with large canopies, and that means that what little daylight there was for the morning’s festivities didn’t quite make it into the woods. What am I saying? It was dark in there. Dark enough that if you held still and found a stacked log bunker, some thicker underbrush or even a dip in the ground and stayed still, a smart player in darker clothing or camo could almost disappear into the shadows and hammer unsuspecting opponents. This didn’t happen to me at this game, though it did happen to plenty of others at the game. Why? My VForce HDR lens.

After installing my new HDR lens in my VForce Profiler, I certainly noticed things brighten-up a bit on this dark Saturday, but where this thing really shined was in the woods. Once I got inside the canopy, though it was still dark, I was able to easily pick out opponents near and far, even those well-hidden and holding still, well before other players around me ever saw these same opponents, if they saw them at all. Naturally, thanks to their anti-fog construction, even when creeping low and slow in muggy conditions or while holding still with little to no air moving through my facemask except for my moisture-laden breath, I never had to worry about fog.  If there’s one thing I know about paintball, it’s much easier to eliminate opponents you can see, especially if you see them first. These new HDR lenses truly gave me an edge in the woods at OXCC last Saturday, and it was even more noticeable when, after a forty-five minute run from one end of the field to the other shooting it out, I put a barrel cover on, exited the field and pulled my goggles off, only to look around, surprised, and say “wow, it’s dark out here!” So I say, to those of you I put paint on last weekend, I’m sorry: I had an almost unfair advantage. I could see you before you saw me. Wait…I’m actually not sorry about that at all!