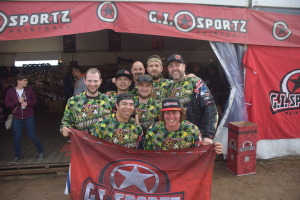 What started as a passing comment nearly 18 months ago, came to an end this week with most of the team, and their luggage, arriving home after an epic 2 weeks of paintball in Europe.

Find a comfy chair and a beverage, here is a huge wrap up off the Millennium tournament experience mainly for those that might not get a chance to speak to one of our guys in the next little while.

One thing we were warned, and a little worried about, was the reffing at World Cup. I think we had 3 or 4 penalties thrown at us in the 21 points we played at Chantilly. The refs watch players (mostly) like hawks, no game watching. Ask for a paint check, and you had a ref on you in seconds. No calls that were questionable (Against us or that we saw) and full explanations if you asked.

Talking to the boys about it, another thing we were looking forward to probably caused those penalties; the paint. There were 3 manufacturers of paint at Chantilly; GI Sportz had 4 and 5 star/Imperial paint available, Draxxus had Hellfire and Empire had Evil. We shot Hellfire and GI 4 star. Both had different grades of paint within their temperature controlled semi trailers available; medium brittle, very brittle and extremely brittle. We shot medium brittle paint. Did the paint shoot straighter than a good batch of Plague? Not really. What this paint did, though, was bounce a whole lot less. Dropping medium from a height of about a metre, 7 of 10 broke. We were checking ourselves far more often just to be sure, and a lot of times the paint broke in places that at a 7s tournament it probably would have bounced.

How much paint did we shoot? Another question we, and others, were interested to see answered. Millennium, if you didnt know, shoots 10.5bps vsSuper 7’s Paintball Series.15bps. We got 24 boxes ourselves, plus were given some from the awesome ladies from Fat Ladies Charms. After our loss to Redball, we probably gave away 2 or 3 boxes worth. So I’d say we shot 22ish boxes in 21 points over 4 rounds. We shoot about 42 boxes at a Super 7s event over 9 rounds. Doing that math we probably shot slightly more at World Cup compared to a 7s event. But not by much.

The games ran hyper efficiently. As most of you have seen, Millennium runs 2 games at a time. Between the prior point being called good, and the next point starting for the next 2 teams, there is 30 seconds (Unless you use a time out, or if the other point is over in which case you get 2 minutes). Your pod bitch better be on point! The pod economy does well at these events
There is a cool little system for towel or time out. You place a metal ‘key’ on a switch; if its during game time it towels, if its between points it calls a time out.

Running down the clock after clearing the field doesn’t seem to be a thing at Millennium. A number of games we ran down the clock a good period longer than we would have gotten away with at 7s. One memorable point, Karl pumped faked a buzzer push, netting a good 60 seconds off the clock before the other team realised.

Dorito side coaching, especially by a big crowd, was new and interesting. Some teams had a number of people spaced up the D side relaying calls, field positions and g counts. Snake side, the players pits, had to be totally silent. Get it right, and it works well. Something that I think could work quite nicely in 7s! Counter coaching, and yelling in a different language over the top of other coaches, did occur.

So where does Aussie paintball stack up in comparison to Millennium? Any Aussie pro team could compete in SPL2, maybe nudge the top end for a promotion to SPL1. We played OD1, the highest “open” division. The only way to get in to SPL2 is to get promoted from OD1.

The what ifs are easy to talk about in hind sight. We would have beaten Low Life had we not got those 2 penalties. I think we could have gone top 4. Redball Paris 2 finished 5th, and our game vs them was super close. We made some small mistakes vs Redball, and they pounced on them, similar to how an STK Australia or nVs would.

There are a bunch of folks we need to thank from the trip;

First and foremost, we have to thank James, Bourke and Dianne fromMacDev Paintball (Official). Their strong links in Europe underpinned this trip actually coming together the way it did, and their guns that we got shot flawlessly for the duration.
Which leads to the next thanks, to Manfred, Tom, Sebastian and Patrick frommaxs-sport.com, and Dennis and the team from Paintball Solms. They loaned us guns, organised local DPL teams for us to train with, helped with the Millennium Series board, had awesome Draxxus paint to shoot both at Solms and Chantilly and were just all round good people.

The next big thanks goes to Mike Argento and all the folks from GI Sportz Paintball. The support while in Chantilly was awesome, as is their local support for us, thanks so much.

Can’t go without saying thanks to Mossy, Jayne and the crew Ultimate Paintball and The Paintball Factory. Their backing of us locally, allowed us to make this international trip actually occur.

Also a huge shout out to Mervyn Leung and Jerseys Clinic for our awesome new jerseys, hoodies and other assorted softgoods! We had a lot of interest from people about buying one of our jerseys, especially with the different flags on the left arm! Watch this space for pricing information soon!

Lastly are the shoutouts to the people and teams we met throughout the trip, trained against, or helped us in the pits and on the sidelines at Chantilly:

– Sebastian and the guys from Destination Wetzlar. We had 2 solid days against these guys at Solms. They then went 4-0 at DPL Div 1 on the Sunday, including their first ever win over Frankfurt Syndicate. Coincidence? Great bunch of guys that said they are happy to train with any Aussies that head over.
– Patrick, Nic, Dennis F, Martin and the rest of the guys from Frankfurt Syndicate for having a hit out against us at Solms, giving us pointers on improving our play and talking through the field with us.
– Robbie O’Dwyer (From Reloaded Naughty Bullets) for coming over to Paris with us and helping for the whole weekend, as well as Arunas and the guys from Reloaded for our big session at Capital paintball. It put us in a great position for Chantilly!
– Freddie and all the FL Charms girls. Thank you for loaning us a gun, and giving us your left over paint. You’re all awesome, and drinking alcohol that has the emergency services number on the label should be seen as a warning, not a challenge!
– Chaz Waters for his pod running and pit help on Friday and Saturday, and the Assala Paintball family overall. Damn you guys can drink, and that jungle juice was epic. Hope to see you all in Aussie in the future!
– Rody from RSHmedia and Ore from Photomonkey for being our photographers! You’ve already seen some of Ore’s work, can’t wait to see Rody’s!
– Gael and the crew from 141paintball.com for filming us! We’ve seen some of the footage, and its awesome! Watch this space…
– Nick Slowiak from Houston Heat. Super nice guy, just dropping in on Saturday and Sunday to help us in the pits. Awesome!
– Kiwi Mat Lewis from Copenhagen Ducks Paintball and Aussie Jon Hunter from London Nexus 2 for helping us out with tips on the field and pit support too.
– The crew from Montreal Image that loaned us 2 pit helpers on Sunday morning without hesitation at a moments notice. Thank you and congrats on your win!

Thanks for all of your words of support and encouragement while we were over in Europe flying the Aussie (And kiwi!) flag.

Finally. to my guys. Epic as bro’s. We crushed it, fucking mint.

See you all soon.
Brownie