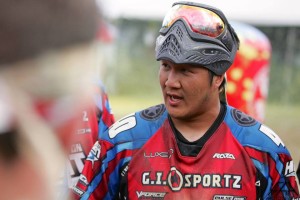 You know those days when the sun feels like it’s melting the paint off your car? When it’s so hot and humid outside you sweat just thinking about not sweating? That’s everyday in Houston during the month of June. There’s hot and then there’s Houston hot, so when the sixth day rolls around, I’m not opposed to taking a day off of practice.

We’re in the middle of the “grind” for Chicago and a break is more than welcome by the whole team. The term grind is always tossed around in the paintball lingo. But inreality, what does it actually mean? I used to think it was playing every weekend until the team ran out of paint or driving 90 miles per hour on the turnpike to catch your third flight in three weeks. I suppose that those are all parts of the grind, but after starting this season with Houston Heat, my personal definition of the term has been broadened.

Two weeks ago the team flew to Pittsburgh and practiced on Tuesday, Wednesday and Thursday conducting drills and scrimmages. Thursday night most of the team flew back to their homes (only the sweet dudes could stay and handle the awesomeness that is a weekend in Downtown Pittsburgh). The following Tuesday, the team relocated to our home base in Houston and practiced Wednesday, Thursday, Friday, Saturday, and Sunday. It’s now Monday afternoon and we’re taking our scheduled day off to run some errands and let a few nagging injuries heal up. But tomorrow morning, we will be up bright and early for practice again in hopes of beating some of the midday scorching sun that comes out everyday in Houston. Wednesday the team will all travel to Chicago and arrive later that evening. Thursday we have a scheduled practice session with the LA Ironmen to work out any small kinks and hiccups in our preparation. Friday, Saturday and Sunday is game time for the PSP Chicago Open and the ultimate test to see if our hard work has truly paid off.

The high temperatures and good, hard practices aren’t the sole factors that have helped to redefine the term grind for me. It’s everything else that goes into a Professional Paintball lifestyle. And so on Monday after the Chicago PSP, we will fly home to put our personal lives back together….but only for a few days. On that same Friday, after only being home for three and a half days, the team will fly to Ottawa to practice for the CXBL and then compete in the regular season matches on Saturday an Sunday. The next day (Monday), four of the members of the team will fly home. However, the remaining seven will fly from Ottawa to London, England and arrive on Tuesday morning to compete in the third leg of the Millennium Series. Battling jetlag and a little exhaustion, practice will be on Wednesday and Thursday. All of that leads up to the tournament that is on Friday, Saturday and Sunday.

Getting to Europe is a little bit of an inconvenience because of the long flights and high travel costs. Therefore, I usually prefer to stay a few extra days and enjoy the culture before I jet back home. As much as I enjoy being at the Millennium tournament sites, getting the true feel of Europe doesn’t really happen until you venture out from beneath the paintball haven. This year, most of us have decided to stay a few extra days and fly to Spain and travel to Pamplona for the Running of the Bulls. I’m sure it’ll be an exciting adventure and hopefully we all come back whole. After we dodge the potential death and destruction that is a three thousand pound horned and angry bull, the boys and I will finally be on our ways home for a five-day rest. And then it starts all over again.

To me, this entire schedule is now known as the grind and that’s what being a Professional Paintball player is all about.